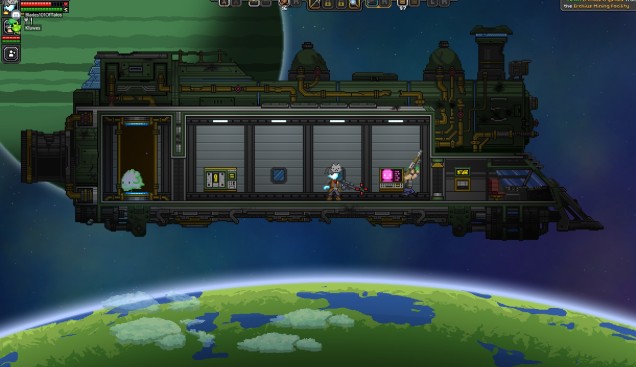 The last time I played Starbound was in 2013. As you’d excpect, a lot has changed in 7 years. Starbound was my fourth purchase on Steam. It was also my first experience with Early Access. I put about 40 hours into the early access build before I put it away. Not bad for a $15 game. Over the years,  Steam let me know every time there was a new update but I never had the desire to fire it up again. That is until last night when we started a multiplayer playthrough.

Starbound has come a long way. There are cutscenes now, a whole tutorial mission, quests, NPCs, hoverbikes, and mechs. But it still has the same basic gameplay  I put so much time into before. The current quest system provides some focus and slowly introduces new systems. The UI took a little to get used to again. It’s not the most intuitive interface. Especially the hot bar.  You can put items on the left and right mouse clicks. I kept using bandages instead of firing my gun. I also need to remap the drop item key to something other than Q because I kept throwing my weapon on the ground all night.

Multiplayer was really easy to set up. Once we both made characters I could join the game through Steam, form a party, and warp over to Greg’s location. I was looking into creating a server before we started playing. More so because I wanted to see how it worked than actually play the game from a dedicated server. I had it working up until the point where I had to create user accounts. I’m probably still going to look into it just to see if I can get it to work.

Our time early in the night was spent dying of hunger until we figured out how to cook. Once we learned how to use the hunting spears this became less of a problem. Cooked meat fills the hunger gage faster than eating raw plants. There’s this obnoxious noise when you’re starving that can be heard by you and your partner so we both knew when the other was on the verge of starvation. Even so, sometimes there’s nothing you can do about it as your character pops and gets respawned on the ship.

We found a premade structure fairly close to our initial spawn to build a little base. We set up all of the initial crafting benches and started exploring the caverns below us. We found a weapons chest with guns. At first glance, the guns seemed better than our starting broken swords. But I still have that broken sword equipped since it’s good for dealing with swarming enemies.

On this first planet, there doesn’t seem like there’s a reason to hide inside at night. I don’t know if this is different once we leave the first planet. I just remember not going out at night last time I played.

Our first objective was to find core fragments to power up a communication device we found on the planet. These core fragments were pretty deep underground so we had some exploring to do. I am not a careful player and fell to my death several times before I realized that I can craft rope to jump down into the caverns. The rope is now my favorite item. It makes me feel like Indiana Jones. Of course, it’s not very useful for getting back up these cavers…but that’s what building stairs out of dirt blocks are for.

The highlight of the night came when we discovered a portal door underground. Accessing the door said it would take us to another, dangerous, dimension. It appeared to be a small room with two chests and no enemies. I opened one of the chests and found a Cat I could wear as a hat. Thank god there are cosmetic slots so I never have to take it off!

We’ll be playing this again soon.