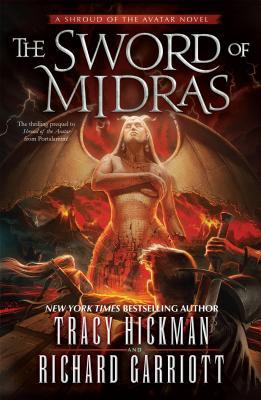 I was at my local library the other day when I passed the Fantasy/SciFi section and saw The Sword of Midras: a Shroud of The Avatar novel by Tracy Hickman and Richard Garriott. My first thought was “Huh maybe it’s a series that has nothing to do with the game.” Turns out it’s the first book in a trilogy that’s a prequel to Portalarium’s upcoming, there aren’t going to be anymore wipes but we didn’t launch yet, MMO. I’m all ready reading something but it was less than 300 pages so i decided to check it out.

I know books based off video games aren’t by any means a new thing but I was surprised when something as seemingly niche as Shroud of The Avatar had a book published.It made a little more sense when I did a little digging. A shorter version of the book was distributed to backers as Blade of The Avatar. It would make sense that people who pledged their hard earned money to a game would be interested in a book about their game. The book was already written so why not get it traditionally published as well? Turns out the publishers didn’t want to publish something that had already been giving to 50,000 people already for mass market. So a few chapters were added so that they could get their book traditionally published but who’s the target audience for this now?

I know this isn’t the first MMO to have a book out before it launched either. I remember being very excited when the Guild Wars trilogy came out that bridged the gap between Guild Wars and Guild Wars 2. Those have fairly respectable ratings on Goodreads, while they weren’t fantastic and I barely remember what they were about, as a fan at the time they did it for me. I’ve also seen the scores of books

The people who already received most of it from the kick starter obviously aren’t unless they really want to read those extra 4 chapters. Maybe once the game actually launches new players will want to buy it but it hasn’t officially been launched yet. It also seems like they’re hinging on it being so successful that it will sell two more books. I picked it up simply because I have a vague idea of what Shroud of The Avatar is but I wouldn’t have paid for it if I saw it outside of the library.

The only thing I can think of is if the story and writing are actually good enough to compete with other fantasy novels. This I can’t comment on yet as I haven’t read more than a few chapters  but I’m interested to see how it turns out.

I’ll get back to you when I finish it.