Monday night was the usual Trove affair. Mondays are the best days to complete shadow towers because of the bonuses for drops. The plan was to run through our usual Shadow Towers with the 2 of us and then spend the rest of the night farming for Binding Darkness.

Binding Darkness is a crafting material used to make gem augments to reroll of boost stats on gems. It’s an important material once you have all of your gems leveled up as it further increases your power rank. Binding Darkness has a chance to drop from all Shadow Tower monsters and will rarely drop from normal world bosses.

The idea is to find a floor of the Shadow Tower that has at least 2 dungeon phases. A floor can consist of dungeon phases or wave clear phases and ends with floor boss. The wave clears offer fewer monsters overall and aren’t ideal. The dungeons contain a higher concentration of enemies and also have world bosses so running these have a higher chance of dropping bindings

Jay is under the impression that the higher the shadow tower difficulty is the more chance binding has to drop. I’m not sure how true this is but we ended up running Ultra Weeping Prophet multiple times this week. This was a good mix of difficulty for the two of us and had 2 dungeon phases. I ended up with 10 binding darkness in about a half-hour which was enough to craft a few gem augments I needed. We didn’t end up farming for long because we had some more people interested in doing more shadow towers.

We’ve been dipping our toes back into streaming the last few weeks and have made some friends through our Twitch chat. We ended up running Ultra Darknik Dreadnaught and Ultra Daughter of the Moon with 2 other people. Our times weren’t fantastic but that was the first time we’ve been able to run the whole Shadow Tower in a very long time. The increased rewards were nice but it was awesome getting to run these with other people for a change.

This week Jay and I took down Ultra Shadow Hydrakken with just the two of us. We’ve been stick on Ultra Vengful Pinata God for a month or 2. We try to clear the shadow towers on Mondays when the bonus is in effect for the Titan’s Treasure. It helps keep the flux fund up for the rest of the week. These are supposed to be for up to 8 players but Jay has enough power rank on his gunslinger to carry us both through the lower level ultra towers.

It was a whim dicision to try the next Ultra tower. I have gotten my Dracolyte’s Power Rank up by a few thousand over the weeks and I thought why not? Getting to Hydra was a bit rough, the mobs in the towers were a bit more difficult, taking flasks with almost every hit. Once we got into the boss room we switched up classes. Jay had his revnant with a tank build that netted him just over 10 million health. My 27k PR Shadow Hunter provided the DPS. It took us about 10 minutes to down Hydra. When you’re used to taking out these shadow tower bosses in under 30 seconds it felt like an eternity. 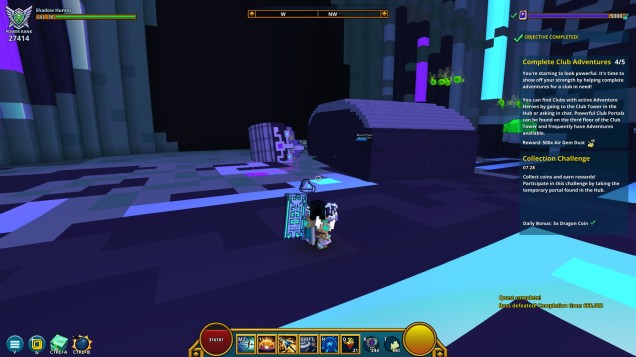 One of the advantages of not burning the boss  is that you get to see the mechanics. Yes, there are some mechanics to the bosses in Trove. Hydra spits out green slime that coats a wide area and spawns adds. Luckily for me, Jay took most of the adds. The few that escaped his range hit my squishy shadow hunter for a lot. When Hydra gets down to around 40% health he starts sucking every player underneath him. After the first time I had to hang back the rest of the fight after one hit took 15 flasks.

We tried Ultra Darknik Dreadnaught. We were feeling underpowered on our run to the boss room.  To my suprise we almost had him but just didn’t have enough power to finish the last eigth of health. Out of the two fights, this one was my favorite. Draknik has 2 different sheilds, a bunch of rockets that leave fire you shouldn’t stand on, and one move that forces players to run to the corners or be one shotted.

So now I have another goal for Trove: to two man all of the shadow tower difficulties. I definatley need to put some more PR into my shadow hunter and my dracolyte. We’ll see what we can get our time down too on Ultra Hydra over the next few weeks. I’ve been lacking some drive to play Trove lately but a new goal is just what I need to get me back into the game. Plus, I still have plenty episodes of the No Sleep Podcast to listen to while I play.