I’ve settled into a nice groove with Kingdoms of Amalur. Lately,  it’s been taking up most if not all of my solo gaming time. At 30 hours in, I find myself in Rathir, the city of the Dokkalfar (Dark Elves) which is where I thought I left off playing on PS3. I can’t be sure though, I know I left off in a big city but that might have been Ysa, the city of the Fae,  and that was way earlier in the game. Perhaps I didn’t actually play this as much as I thought… The main story has me boarding a ship to the next continent so I’m guessing I’m halfway through the game. 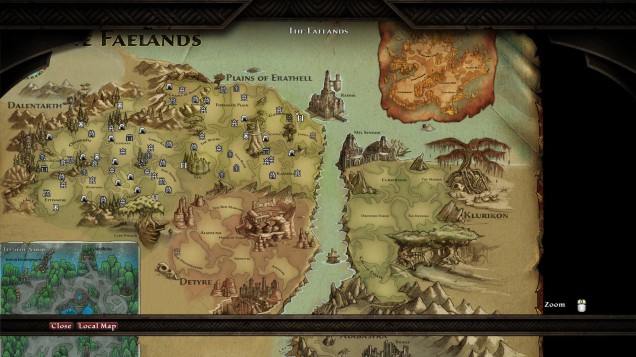 I’d like to say it’s the riveting gameplay or the stellar story that’s kept me playing but that’s not the case. In fact, the combat I remember loving so much has turned out to be just so so. Especially now that I have two AoE attacks that will one-shot almost anything that’s not a large creature. The main story isn’t bad but it’s not all that exciting. What it boils down to is: I’m the chosen one who’s going to break the stalemate in a war that’s been going on for 10 years. Probably, by killing the leader of the Tuatha, Gadflow.

No, what’s kept me going is the world-building going on in this game. In yet another deviation from how I usually play RPGs, I’m taking my time reading and listening to text that isn’t needed to progress. I’ve found this extremely rewarding thus far. Most NPC’s will have a few lines of dialog relating to the quest and then a list of topics that they’ll also talk about. These range from the zone/city your in, themselves, other NPCs, and events going on in the game world. At first glance, it seems like most of the NPCs will talk about the same topics but I’ve found that each NPC adds just a bit more information about any given topic. I’ve also been reading the books I’ve found on my adventures which do a great deal to flesh out little bits of the world and unlike Skyrim, most of them are interesting to read through. It’s actually kind of amazing how much time and effort was put into completely optional dialogue and text. Especially when you consider that everything is voiced too.

I mentioned that I was choosing which quests to do based on urgency. Right now the main quest has me meeting with 2 people who I might be able to help and turn the tide of the war. The way I see it, the war’s been on for 10 years they can wait a few more days to turn it around. So I’ve been doing side quests, a lot of side quests. As of right now, I’ve completed 76 quests. Most of these quests have been interesting and added to the world. I have run into a few quests that are of the “kill 10 rats” variety. For the most part, though they’ve been thoughtfully amazing. I just finished up a quest in Rathir where I helped a wealthy merchant’s son fake his own death by starting a duel with a war hero, putting a sedative on the war hero’s dueling sword, and then arranging for a ship to load him on and take him far away from the war. Unfortunately for him, his mother found out and paid me handsomely to ship him instead straight to Klurikon, the front lines of the war.

So I’ve been taking my time with the game. I’ve been completing zones even when they’re no longer a challenge, I’ve been going out of my way to find books I haven’t read yet, and I’ve been drilling down into these dialog trees. The fact that it’s all voiced makes it easier for me to choose those optional dialog trees. That being said, I haven’t gotten this much enjoyment out of an RPG in a long time. I’d be open to trying this method with another game in the future even if it’s all text.