I left work on Thursday ready for the 3 day weekend ahead. I left earlier than usual because the place was dead. I do IT at a school and, trust me, no one wants to deal with a broken computer the day before a break. That’s what Monday is for.

I got home and went to boot up Trove only to find that I was getting a network error when I tried to log in. Shortly after, the launcher reported that the game was offline for some emergency maintenance. My plans for the evening were put on indefinite hold. So I went hunting around on my desktop for something else to play.

I settled on World to The West. I believe this game came from a Humble Bundle Monthly and I had no idea what to expect going in. From the few screenshots on the store page, it looked like a top-down RPG of some sort. As it turns out, this game is actually a standalone follow up to Teslagrad. I’ve played Teslagrad on the PS4 thanks to PS+. I didn’t get very far but it’s a solid Metroidvania.

World to the West turns out to be less of an RPG and more of a puzzle game with a story.  So far I’ve played as 3 characters. There’s Lumina the teslamancer who can teleport a short distance,  Knaus the miner who can dig under the terrain to avoid enemies and crawl through small spaces, and Miss Teri the mercenary who can grapple onto ledges with her scarf and, uh, mind control animals. Ya, that’s something I didn’t see coming.

The story has Lumina accidentally getting teleported away from her family after messing with her parent’s machines. She ends up in an unknown location, runs around for a bit, and then promptly falls into a hole. Cut to chapter two where we meet Knaus who is trying to convince his mining operation that they are not, in fact, on the moon. This revelation is made after he and a group of others find a tree growing underground. After explaining this to the higher-ups he’s exiled to wanter the caves alone. Cut to chapter three and we meet Miss Teri. A daring mercenary hired to retrieve an ancient relic from a cave. Shortly after venturing out from the town Teri meets Knaus at a totem with 4 faces on it, two of which are theirs. At this point Knaus if following Teri and this is where the real heart of the game lies.

There are totems throughout the world that serve as both save points and fast travel points. The catch is each character has to touch the totem before they can use it to fast travel. So if Teri reaches a totem using her special abilities then you have to find a way for Knaus to reach that totem using his abilities in order for him to use the fast travel. I like this concept as it makes you really pay attention to the environment.

Here’s what typically happens to me with puzzle games. I really enjoy the beginning where the game teaches you all the mechanics of the game.  I start to feel confident leveraging all the different parts to complete the puzzles, progressing at a good clip. And then the game throws a curveball where I’m stuck. Then I put it down and never come back. 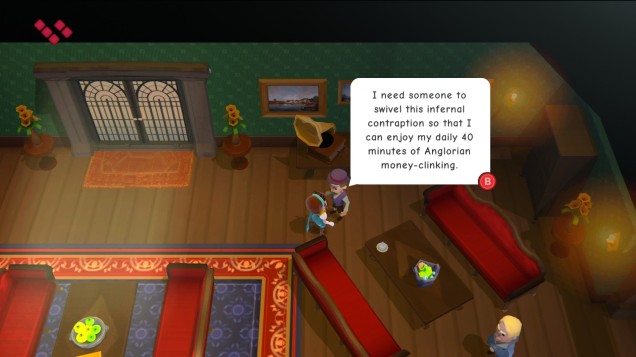 I’ve been attempting to get better at not quitting when games get complicated. I don’t think I’m far enough into World to the West to hit a major head-scratching challenge. I have run into a couple of areas where I ran around for a few minutes trying to figure out how to progress. This almost always came down to me missing something like a small side path or a key.

This game has great music. I don’t often pay attention to music in games but, when it’s good, it sticks out. Each area seems to have its own track. I find myself trying to complete a difficult area just so I can hear the next song.

I’m looking forward to playing more. The writing is quirky and doesn’t take itself too seriously. I want to see where this story goes and the core gameplay is enjoyable. Maybe next time I play it won’t be because the other game I want to play is down for emergency maintenance.