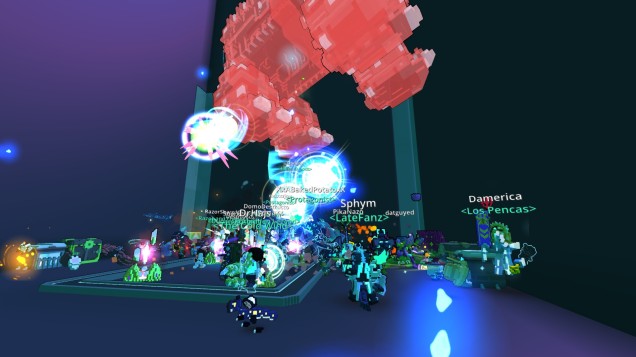 It safe to say I’m back into Trove. The new update has breathed new life into the game for me. There’s also the added benefit of having an excuse to listen to podcasts again. I bought my patron pass for the month and have been happily plugging away at a few new goals.*

Level the Lunar Lancer to 30

The original idea was to level a new class specifically for delves instead of changing the stats around on my Dracolyte. I’m still leveling my Lunar Lancer to 30 but I’m not sure I want to completely switch over. I like the different play style but I know how long it takes to get a class to the stats I’ll need and it might just be easier to try and get my light up on my Dracolyte.

One of the added bonuses of the new class leaderboard rewards is having a reason to play another class. Originally, you just needed above 10k PR on every class to guarantee 12 empowered gem boxes a week. This lead to slapping a whole bunch of bad to ok gems and gear on classes and never playing them again. With the new system, playing them for a short time is the only way to get your Weekley boxes.

Level the Knight to 30

The knight is one of the original classes. I’ve disliked the Knight for as long as I’ve played Trove. But he does have one thing going for him: his subclass.

The subclass for Knight grants faster ground mount moving speed and up to 6 extra flasks. The ground mount speed is meh since you’re flying most of the time, though it could be useful for delves now.  The flasks are huge. Not only will it allow you to live longer but since activating flasks activates your emblems as well, it gives you more DPS. And if there’s one thing you want in Trove it’s more DPS.

Lucky for me, his class gem makes him much more fun to play. He’s been sitting at 20 for years but I’m finally getting around to leveling him to 30 for the extra flasks. I don’t enjoy it enough to want to play it often though. So I wait until Saturday, which is XP boost day, and pop a double ex[erience potion which has been working quite well. He’s currently sitting at 25. I should be able to get him to 30 either this week or next.

This is the next Dragon I’m after and only for that 1% crit hit. Sometime between the last time I played and last week I lost 3% crit hit. I’m not sure why but I’ve been slowly using the gem stat boost items to get my crit hit back to 100%. This will make it that much easier to do. It may not be the most important permanent stats to go for right now but I’m tired of seeing 99% crit hit…

The only thing I need to craft it now are 180 dragon coins. I should be able to get those through daily challenges and using my cubits to buy Dragon coins this week.

*This is definitely a post more for me to keep track of the things I want to do than anything else.

One thought on “Some Short Term Trove Goals”