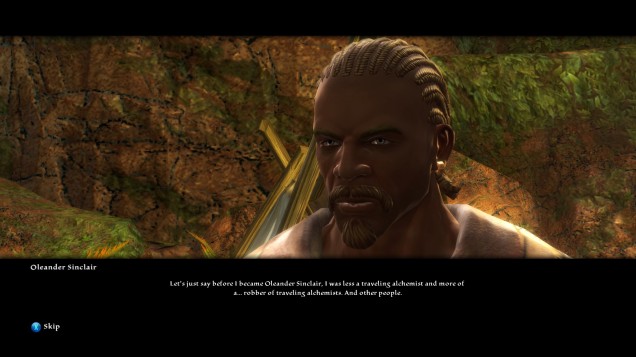 I ran into an interesting Reddit thread last week that I can no longer find. The jist of the discussion was about how different people tackled open-world RPGs, especially when it came to questing.

Typically, when I find myself in an RPG I follow the same pattern. Create a character, do the intro exposition main quest, then vacuum up all of the side quests, and tackle them one at a time until I run out. Once the area is clear I’ll pick up the main quest again until I find another side quest to distract me. And then repeat. This is actually burned me in a few games to the point where I just stopped playing them. I’m looking at you Skyrim and The Withcer 3…

So I was looking for a new way to approach  Kingdoms of Amalur. KOAR lends itself perfectly to the above method. There are side quests everywhere and also conveniently located in MMO style quest hubs. There are a few quests I’ve run into out in the world but the majority of them are picked up in towns.

I found one unique answer in the thread that I wanted to put into practice for my playthrough. It suggested doing quests based on their urgency. Whether their the main story or a side quest, rescuing someone from immediate danger takes precedence over meeting with someone to discuss something or fetching materials for someone. I’d never thought of doing this before.

So far I’ve found this method to be quite immersive. It’s also been limiting the amount of time between story quests which tends to happen when attempting do all the side quests I see. I’m finding that the story flows better and I’m more engaged with the main quest. But it also leads to situations where I’ll do a whole sidequest line because it feels more important than meeting up with the next story beat.

For example, the main quest was having me meet up with Alyn Shir, a mysterious assassin looking character who keeps showing up at the worst times, to meet with someone in the House of Ballads to decipher an ancient artifact. While that’s all well and good, on the way I stopped at a town that was suffering from a plague. Didenhil was on the brink of being wiped out when I arrived. I put the learning more about the Codex of Destiny on hold to run several quests to not only gather materials for the medicine to fight the plague but also find its source and destroy it.

I found it difficult at first to skip the yellow exclamation marks when the main quest called for it. Old habits die hard but it’s getting easier as I do it. I’ve had to remind myself several times that I can always come back if I want to. It’s not like I need to do the side quests, I’m already feeling over-leveled for the zone I’m currently in, but there’s that chance that a side quest could reveal an interesting tidbit of lore or launch a quest chain that’s more interesting than the main story.

How do you guys tackle the whole main quests vs side quest thing in the games you play?

2 thoughts on “Questing with Urgency”