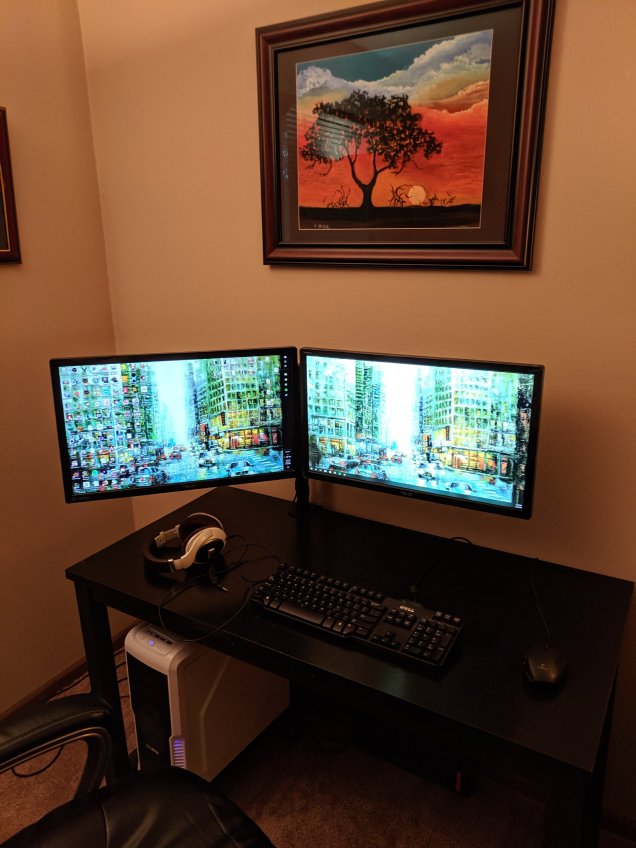 For the longest time, I wanted a 27″ monitor but that would look weird with the 24″ so I’d have to buy 2. It turns out I don’t have the desk space or the funds to buy 2 nice ones. So I settled on getting another 24″ monitor and a VESA mount for the same price as a low end 27″. This was Sunday night.

Fast forward to Monday. I forgot Amazon Prime has that whole 1-day shipping thing now and was quite surprised when I got a notification that they were both delivered. Now I live in an apartment complex. This is important because Amazon delivered it to my door, in its original packaging. The thing practically screamed, “I’m an expensive electronic come get me”. I would very much like to know how Amazon decides what gets delivered to my door and what gets delivered to the apartment office where someone has to sign for it. I mean I’ve had to sign for socks before Amazon, freaking socks. But this monitor, Nah leave at the door it’ll be fine.

Anyways, I spent an hour and a half last night setting up the mount and managing all my cables. I took the opportunity to clean off my desk, clean the area around my desk, and vacuum places that haven’t been vacuumed in a while. After all was said and done, it looked a lot nicer than it had before.

I got it all set up just in time to play some Trove with Jay. We ended up streaminig, which isn’t something we’ve done for a while. I’d be lying if I didn’t say that the second screen definitely had some allure for streaming. Also, I can have Evernote open while I play games and take notes for future blog posts, see it’s totally necessary.

I am very much in the new toy phase with this purchase. I haven’t had an upgrade for my PC since I built it in early 2017 so it was time.

Now that it’s all set up and I’ve used it for a bit all I can say is…I might need a third.

For those curious, I purchased a second 24″ Asus VE248 monitor with  Vivo Dual Monitor Stand.

7 thoughts on “That Second Screen Life”