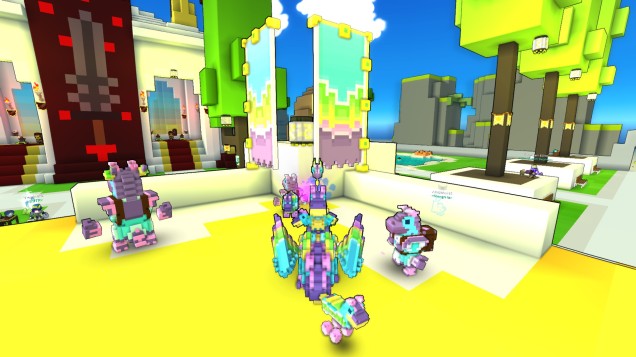 I took a few weeks break from Trove after playing heavily for the last 2 or 3 months. For a while, I just wasn’t making any progress on my main classes and I had gotten a little bored of the No Sleep Podcast.  So I logged in on Mondays for my rewards and hoped I’d get a nice empowered gem from a box and didn’t do much else for the rest of the week.

Right now, I’m in a comfortable place in Trove. I have things to work on when I log in even if it’s just filling up tomes for the week. Currently, I’m working on getting my PR up for my Draco. It’s been so long since I had a reason to do anything with him but I finally pulled a good empowered gem to make some more progress on him

Being away for a few weeks I almost missed the Sunfest event entirely. Events in Trove aren’t usually more than a few quests long with some sort of mount or ally unlocked at the end of the chain. On a rare occasion, events will offer a bit more. The main reward of Sunfest was the Worldspring Dragon Egg which was “easy” to obtain as long as you had around 80K flux.  Tysorion gives decent stats too, the most notable are 3% critical damage and 250 physical damage.

Coming in at the tail end of the event I didn’t get many of the unlocks. I did manage to pick up the Party Pup ally and the House Panatea Battle Standard to complete my Dracolyte’s party pinata look. I was really struggling to get the last few quests done in the day before the event ended. I was worried I wouldn’t be able to complete the Kill 50 pinatas quest to get the permanent battle standard. It turns out if you hang out in the hub long enough people drop enough pinatas to complete it.