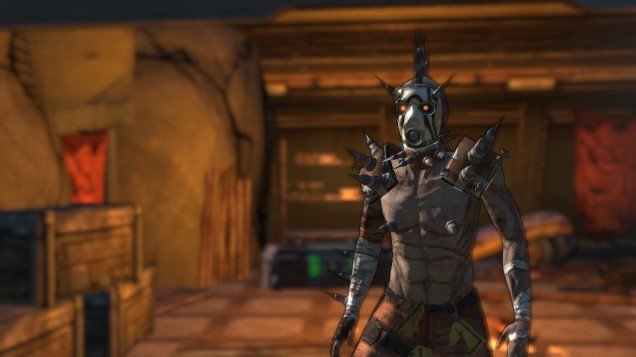 I wasn’t interested in Borderlands when it first came out in 2009 on the account that I was really into the Nintendo Wii at the time and didn’t like the FPS genre all that much. I remember my friends in high school were eagerly awaiting it’s release. I didn’t even really know what it was until a few years later when I started playing it with Jay. By the time I played it with him he had played it 7 times over and new where do go and what to do andd ended up dragging me through the game. We kept restarting to play new characters and I don’t think we ever got farther than the second boss.

Fast forward to a few days ago when I decided to fire up the PC version of Borderlands I got from one steam sale or another. The game is brutal I spent more time at the revive station than actually shooting some times. By myself there’s no other focus for the enemies so I’m the one absorbing every bit of damage. It was still fun though if not challenging. It was the first time I actually paid any attention to the story and it turns out I wasn’t missing out on that much. As fun as it was I’ve made it to level 15 where we had stopped in the past and I don’t know if I’ll ever go back to finish it.

I bought the Handsome Jack Collection to play with Jay about a year and a half ago and we still haven’t beaten it. Borderlands 2 is much like Diablo 3 where I get in a mood to play it and then it becomes my main game for a few weeks until I get bored. So every few months or so we’d pick it back up and get a lot of story done and some DLC and then we’d stop.

It’s always been a struggle to get myself psyched to play it that first time after a long break because the co op game play is a lot of fun but the story is kinda boring even with a great cast of characters. And after a few hours the dialogue gets overdone. I love spoofs, puns, and pop culture references in games but when its all of that 24/7 it gets a little tiring.

With that being said me and Jay are currently working through BL2’s DLC Tiny Tina’s Assault on Dragons Keep and it’s fantastic. I especially enjoyed a quest line spoofing Dark Souls and the whole setting of being in a tabletop game. In fact both the DLC’s that we’ve played through have been much more interesting than the rest of the game.

Now we’ve just started the story in the Pre-sequel and it’s nothing new in terms of story telling or game play. But the Pre-Sequel, despite the story outshines the other 2 in terms of co op for one reason. I can be ClapTrap who is simultaneously the trolliest and most supportive character all in one. I can dish out tons of helpful buffs and abilities to my allies one moment and then turn us all into bouncing rubber ducks the next moment. Much to the chagrin of my friends. Since the game is set on the moon there’s very little air and apparently there’s a mechanic my friends keep talking about where they have to fill up their air canisters every now and then or they die….but I don’t really know because as a robot I don’t need air.

So after this intensive few weeks of the crash course to the Borderlands series I can say that its much more fun to play with friends than alone, the story is nothing to write home about, but the game play and co op is top notch. Your always one drop away from a gun that will change your entire play style or make you super overpowered for your level.

One thought on “Sampling the Borderlands”