I love Halloween. It’s one of those holidays that makes me feel like a kid again. Kind of like Christmas but with more candy and monsters. It’s kind of a weird holiday, we pretend to be things we’re not and we send children out to get candy from the neighbors. It’s the only time of the year that people will tell you they bought a pumpkin and that statement isn’t  followed by the words ‘spiced latte’. It’s also during the best part of fall, everything cools down,the leaves look amazing and there’s no snow.

This weekend I did the All Saints Wake event. It’s really easy and takes all of about an hour and a half to get all the seasonal goodies. Goodies that include a snazzy vest, some orchestral rolls, and a minion. The Continental Circus is putting on a Haunted House in Hauke Manor, glad they’re doing something with that place. To make sure the Circus isn’t up to any mischief the Adventure’s Guild sends out an investigator. Of course shenanigans ensue and we’re sent into the haunted house.

The 4 person dungeon has you doing all sorts of tasks in the haunted house like collecting cookies and throwing smoke bombs at pumpkins. My personal favorites was finding all the magic circles to stand on and finding the code to open the hidden coffer. I liked these because it forced people to actually interact even if it was just calling out some numbers. All of  this while sneaking past monsters and not being turned into pumpkin.I thought that a cooperative dungeon like this would have been frustrating but all 3 runs went smoothly and everyone was really friendly and helpful.

Other than the actual event activities I loved the decorations Gridania and Huake Manor. Pumpkins everywhere! 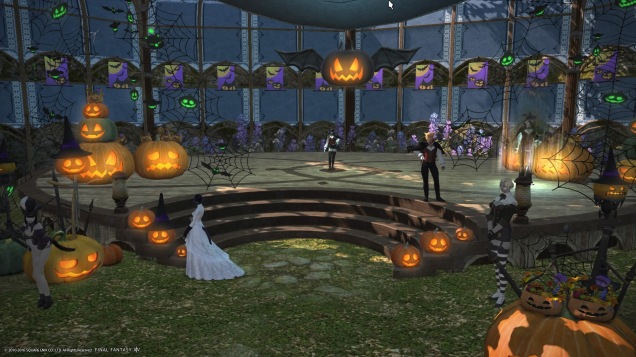 Other than completing the event I’ve still been leveling up my Dragoon. He’s up to 47 now, almost there. I’m also still working on ranking up with my Grand Company. I like doing the Grand Company hunting log but I’m so glad The Sunken Temple of Quarn is done with. It took me and Jay a while to understand the mechanics to the first boss there but luckily we had a patient group who didn’t mind teaching us. I’m hoping I can get the Dragoon up to level 50 by the end of the week and continue my way through the main scenario.

One thought on “Halloween Hijinks”