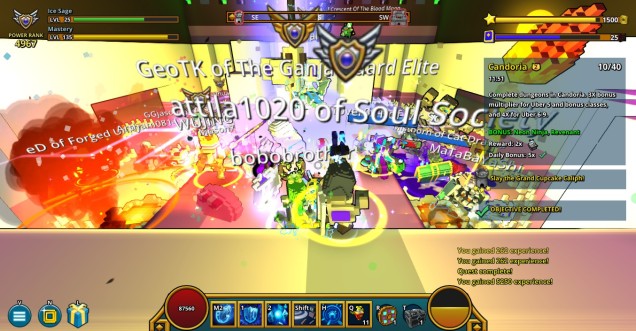 Once upon a time Trove used to be my main game for a few months. I would play regularly with a group of friends and we had a lot of fun grinding levels and farming the night away. Then the Mantle of Power patch was released and it took away the ability to get classes through game play as well as adding an endless grinding endgame that didn’t add much to the overall game. Even though I had all the classes unlocked, putting classes behind the cash shop didn’t sit with me quite right. Especially since most of the fun I was having in Trove was trying out all of the classes. While my friends cntinued to play I stepped away from the game. Every time they asked me to come back, my answer would always be when classes aren’t only in the cash shop anymore.

Flash forward to Tuesday. Trove’s Snowfest & Get Crafty patch released. It added a whole lot of changes to the game including simplifying the market, expanding player inventory, and the ability to craft classes, costume s, and even premium items. I couldn’t resist, I downloaded the lottery 1 gig game and sat down ready to return to a game that had given me so much fun in the past.

I actually like this new crafting system for classes. Before they initially took it away you would have to farm a certain never of dungeons to fill up a bar that would give you cubits. The cubits were use to buy various items from the non premium store and it included classes.

In the new system, you unlock classes by gathering a bunch of materials and praying to RNGesus that you get some chaos cores from the chaos chests. While it takes longer to unlock every class at least for me it would give you more time to play around with your new class before unlocking another. It also probably has to do with the fact that I actually like collecting materials.

As always players have gripes when it comes to massive overhauls in one patch. Some players feel the crafting cost is too high and others don’t like how the market place has been cut from 5 currencies to 2. But what really has the majority of players up in arms is the changes to chaos chests aka premium lock boxes. Before Tuesday they were tradable and sold for a pretty penny after the patch their now farmable drops that are essential for the new crafting as they have a chance of dropping chaos cores.

Overall I think the game is taking a step in the right direction. Trove seems to be loosing its death grip on it’s players wallets and making things a little easier for new players. I do wonder if this change has to do with the games recent console release. I almost wouldn’t mind starting over on the PS4 once this patch hits over there. Sure it’s a lot of grind but I’m thinking i would be a great game to remote play on the vita. Though from what I’ve experienced so far, Trove isn’t nearly as fun playing alone.