It’s been quite a week in EQ2 for me. I thought after a week my curiosity would wear off and I’d return to my regular gaming habits. But truth be told I haven’t touched Guild Wars 2 since I started on Fallen Gate. I started the week at level 5 and have slowly fought my way to level 13.

At the beginning of the week I found myself doing more tutorial quests. One actually taught me about gathering and collectibles and gave me a nice materials chest for my bank so it wasn’t a waste of time. The boat I took from the Isle of Refuge was destroyed and I found myself in a very cold and desolate world of the Frost fang sea. Orcs seem to thrive here though because there are plenty of those all over the place.

Leveling from 5-9 had me doing quests for a band of travelers as they prepared to move to their next step on the journey toward New Halas.  I collected things for them, I found missing children , and I  even tamed some snow lions to get them through to the next leg. After all of that they still just sent me to the Great Shelf on my own. They didn’t even give me a lion for protection. 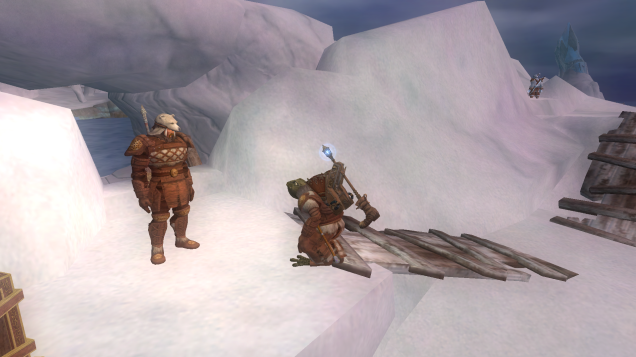 One of the things I’m finding is that the quests in EQ2, at least in this revamped starter island, are actually interesting. Each quest hub has a few quest lines that all tie together and form a coherent story for that particular area. I can’t even say that there is a main quest right now except getting to New Halas but the collection of side-quests really works for me. I especially like that I haven’t found a single one and done quest. Every quest giver has had three to five quests. It makes me feel like I’m actually helping this particular NPC instead of running around from person to person. Oh and I can’t forget to mention how much I like the little conversational flavor text for your character. Essentially their just next, yes, no, accept buttons but it’s so much more entertaining to make snide remarks instead of just blankly agreeing.

Let’s talk about quests for a minute on Fallen Gate. The quests have been out leveling me by a lot. I know I said I wanted to play this server and see all the old content but I did not expect to be level 13 and have all my available quests be level 16+. Was it like this at launch? Is this intentional? Maybe I’m just a spoiled millennial gamer but I’m not complaining, it makes accomplishing said quest a little victory all of it’s own. Getting to level 10 felt like such a slog. I had a collection of gear and some skill books to use at level 10. I managed to find a repeatable quest where I slaughtered orcs and turned in the quest over and over again for about an hour until I finally dinged. I also received this hideous mount, the Pedipowered Posterior Punter. At first I didn’t get it, putting the mount on makes my Froglok walk instead of hop  and he looks like a creepy marionette. And then I jumped…straight up a cliff. It’s been quite a useful tool for exploring and avoiding some encounters.

Levels 10-13 have had me take part in a war between the Orcs and the Dwarves that live here. There’s orcs of ever flavor, magic orcs, warrior orcs, lazy orcs, necromancer orcs, you name it, the Frost Fang Sea has an Orc for it. The nice things about leveling so slowly is that I’ve honed my orc killing techniques.

I can’t help but feel like I might be going about this leveling the wrong way. I’ve made it to the Cragged Spine and have been doing level 16 quests when I can. It’s been a slow go and I haven’t seen all that many people around me to group up with . Nevertheless, it’s been fun. I have my own little goal of completing all of the quests here, getting to New Halas, and leaving for the mainland. I think I still have a while to go but it’s definitely been an adventure so far.